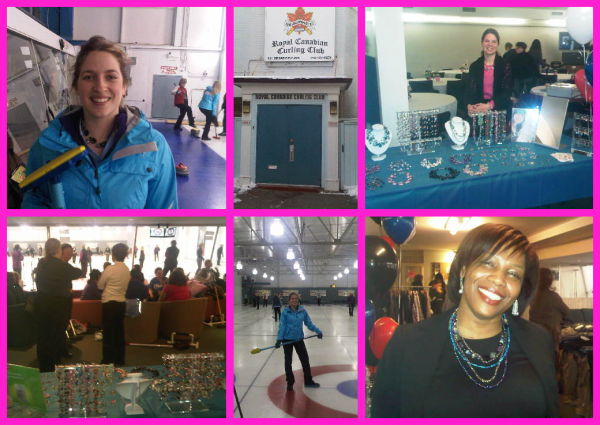 Last weekend I was invited by Ashley Waye, Owner of August Moon to sell glamjulz at the Royal Canadian Curling Club in Toronto.  She and her team mates were participating in a “Bonspiel” and wanted to have some great exhibitors there so they could shop between games. Ashley is not only the owner of two beautiful locations in Rosseau and Port Carling but also a lawyer and curling since the age of 6!  This 20 something entrepreneur is a real firecracker!

Okay so let’s back it up!  What the heck is a “Bonspiel?” A 20 something girl that curls? I thought this sport was for the over 40 crowd! A glamjulz booth at the game? I’m gonna freeze!!!! Well, my curiosity got the best of me and I graciously accepted the offer.

Pulling up to the building that day actually gave me goosebumps! A gorgeous historical building tucked away at Queen and Broadview. The building was built in 1906 and originally called the Royal Canadian Bicycle Club. In addition to cycling the club also offered ice skating, hockey, curling and 5 pin bowling.  In 1953 the club changed it’s name and focused only on curling.

When I walked in I was surprised to see over 100 women out on the ice, all different ages, ranging from 20 to 60+!  It gave me such a great feeling.  Another “proud to be Canadian” moment I suppose! And it was definitely NOT freezing! This club had the best set up. A beautiful lounge that overlooked the ice that was toasty warm. The players were greeted with Bailey’s and coffee which I’m sure kept them warm on the ice too! The “Bonspiel” simply meant that this was a tournament played for fun between several different teams. Some believe that the term originated in the mid 1800’s when a French/German immigrant yelled out, “Bon Spiel” at a game, translation  “Good play”. I suppose that makes sense!

The day was filled with fun!  It was great to see Ashley out there with her teammates and I met another courageous entrepreneur Alicia Vianga who owns her own lingerie store Premiere Jour, and is also a blogger for the Huffington Post. Alicia was also thrilled when she won a glamjulz necklace from the “Bonspiel” raffle!

What a great adventure self-employment can be. Opportunity knocks all the time and you never know which door is going to lead you to something new. Making connections and having fun is what it’s all about.  I’m so happy that I ventured out and had a great time with some amazing women on a cold day in January!