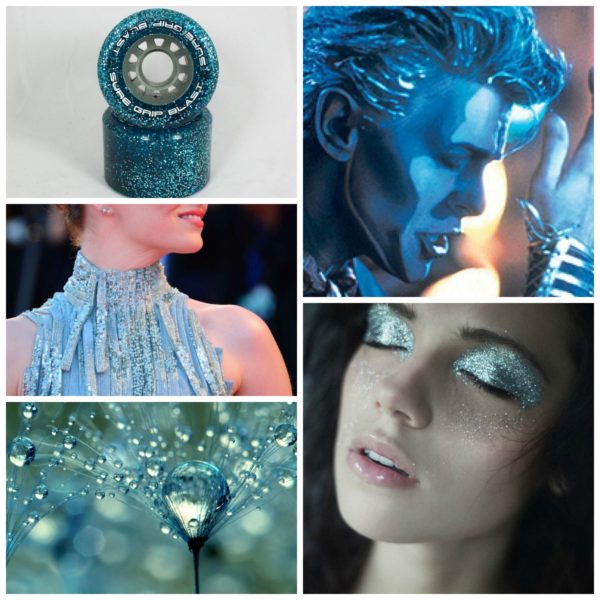 Blue shows up every season.  We can’t seem to live without it.  We love it in all shades and most people will tell you it’s their favourite colour.

Have you ever wondered why?  I did my research and there is some pretty deep meaning behind this colour.  Apparently, blue is the wisest colour.  The colour has a higher level of intelligence with a spiritual perspective.  The colour inspires higher ideals, promotes self-expression and our ability to speak the truth.  The paler the shade of blue, the more freedom we feel.

Any of this resonating with you?

Blue connects me with many things that I love.  A sparkling blue ocean, Aquamarine in my bubble bath, my favourite jeans and, of course, the infinite sky on a clear sunny day.

Blue also connects me to David Bowie.  “The Man Who Changed the World.”

To me David Bowie was a man who lived for freedom.  He was born an artist and he never compromised his work and what it meant to him.

The man was fearless, the original glam rock icon!  He was not afraid to be himself.  He pushed rock and roll so far out of it’s comfort zone that it needed to be re-examined.

When Bowie hit the music scene he brought with it a box full of surprises.  Up until that point most rock stars swaggered along in their blue jeans or leather pants with long hair, and a few beads around their neck.

Bowie gave us an incredible gift, when he released that box full of surprises we got to see every facet of his personality.  He created characters like Ziggy Stardust, Thin White Duke and Major Tom.  He piled on the makeup, dressed in colourful and feminine costumes and outwardly expressed his sexuality.  If he wanted to express it, we got to see it.  It was out on display for the world to observe and form opinions on.  He welcomed the controversy and he ROCKED it hard.  He earned respect and a huge following because he stayed true to who he was.  He changed the face of rock and roll and became a rock god.

The domino effect of his bravery taught his fans and followers that being different was not dangerous and that strange was not bad.  He gave us the strength to own our differences and to understand that we could lead the way with those differences.

When you choose a piece from the glamjulz blue colour palette this spring I want you to live by these valuable lessons from David Bowie.

As human beings we have these annoying default positions that we often find ourselves in.  We fear change, we feel trapped, and we get complacent.

Let’s try something different when those feelings come up.  Write down all of the things that you love about yourself that set you apart from everyone else.  Look at patterns in your life where you want to see change.  Surround yourself with people who challenge you and bring out the best in you.

Look to an icon like David Bowie.  The man was unfailingly cool, always relevant and he re-invented his dynamic persona until his dying day.

I would love to hear from you in the comments below.  What will you do to try something different and surprise yourself? What comfort zone are you hanging out in that you want to step out of?

Thanks so much Steve! I still remember when you made me the mixed tape with “Changes” my favourite line from that song has always been,
“And these children that you spit on
As they try to change their worlds
Are immune to your consultations
They’re quite aware of what they’re going through”

Mmmmmm….blue crystal pendant maybe ? The one I have been eyeing !!! That thing is spectacular, definitely on my wish-list ! Blue is probably my favourite colour. Cobalt, navy, denim – love, love, love !

Natasha!!! The Pendant looks spectacular on you. You have such style and blue is YOU! XO

Blue is such an amazing colour!! It’s the colour of my eyes and it’s with my eyes that I get to see all of the amazing treasures that this world has to offer … one of those things is glamjulz!!! Can’t wait to wear my blue julz this season! XO

Natasha! You’re the cutest! Those are some BIG blue eyes and I do believe I hear a rope necklace calling your name this season! <3