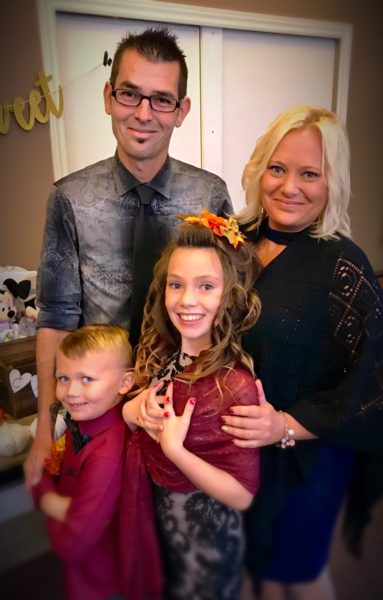 This year, through the sales of our Three Little Wishes earrings, we are helping a young mom and wife named Lindsey.  Lindsey has been very brave and allowed us to share the details of her story.

Lindsey got her first period at a very young age! Not your average period either.  She spent years as a child getting dressed in the shower because the bleeding was so heavily.  By the time Lindsey was 16  she made her first visit to the emergency department.  She was screaming with such intense abdominal pain that her mom took her to the hospital.

Doctors took the symptoms seriously in case it was Lindsey’s appendix.  When they ruled that out they stopped observation and told Lindsey it was probably a urinary tract infection.  Lindsey was sent home after 5 days in hospital.  The pain didn’t end there.

Countless doctors and specialists could not diagnose her.   Lindsey started thinking that  perhaps the symptoms were all in her head. Finally Lindsey met a doctor who decided that she would go inside to look and that’s when she received her diagnosis of severe endometriosis. Her uterus lining had been growing on the outside of her uterus and tissue had attached itself to the surroundings. Unfortunately there is no cure for endometriosis, just treatments.

Lindsey tried nearly every birth control pill, injection and insertion there was to offer. She underwent 13 surgeries to burn the invasive tissue but nothing helped.

Then Lindsey married Kevin, she wanted to be a mom.  She and Kevin tried and tried but were told that with Lindsey’s condition it wasn’t possible to have a baby.  Well, the doctors were wrong! After a very scary and unsettling pregnancy with so many complications, Lindsey’s uterus gave them their first baby!  Beautiful little Riley- Roo.  And while the tissue was still under control from Riley’s birth (pregnancy is often recommended for endometriosis) she gave birth to Trent.

The challenges and time constraints of being a mom took Lindsey’s focus off herself and on to caring for her children.  Trent was born with medical complications himself (born with a liver disease) Lindsey ignored what was going on with her own body and focused on being an advocate for her son.

Over that course of 6 years things gradually got worse.  Heavy bleeding throughout her menstrual cycles, anemia, pain and severe cramping.  It wasn’t until the early summer of 2018 that she decided she couldn’t take it anymore.  Riley found her mom passed out in the house during a family dinner from loss of blood. The next day Lindsey called the doctor to get the ball rolling.  Her symptoms and history didn’t leave much to the imagination for the doctors to know what was going on.  The blood work and ultrasounds confirmed their suspicions and Lindsey was diagnosed with endometrial carcinoma, a form of uterine cancer.  Lindsey says the problem with this cancer is that so often women don’t recognize the symptoms as anything more than a “bad period” or “girl issues.” It has been Lindsey’s experience that very rarely do doctors take this pain seriously.  All the years Lindsey’s been going through her pain she’s been turned away more often than embraced by the medical field.  Unfortunately the cancer has now spread to her left ovary as well.

Lindsey feels fortunate that her team of medical practitioners are confident that the cancer hasn’t spread any further.  A hysterectomy is planned for her future with unknown treatment to follow.

Lindsey has started hormone therapy to begin the process as she is not quite ready for the surgery yet.

In speaking with Lindsey about her condition she said, “I cling to the word HOPE… Hold On Pain Ends.  Because it will.  And my life will move forward.  But at the same time I know it will be changed forever.  I have joined an international online support group.  My “peach” sisters as they are known,   have been amazing.  We’re in this journey together.  I have 3 months off from work starting in December with an unknown recovery date.  And to be honest, it scares the hell out of me.  But I’m the strong one in this family and I will continue to push through. “

Lindsey is an amazing woman and an inspiration to us all.

We are honoured to be a part of her journey as she raises awareness about early detection for all women.

With your help, we are able to make a huge difference in the lives of families suffering from the financial burdens of cancer.  Please consider our Swarovski Crystal Three Little Wishes earrings as part of your gift giving this holiday season.

Lindsey you are an amazing woman. My heart and thoughts go out to you.
Heartfelt feeling goes out to you and your family.

Lindsey, we have no doubt you are going to beat this disease. They say attitude plays a big part of beating cancer. And your attitude is absolutely awesome. If you need a good laugh and a great movie to watch ( if you haven’t already seen it ) watch the Dr. Patch Adams movie starring Robin Williams. He made it about 20 years ago and everything is relevant today. We rented it through iTunes.

Bonnie! Thank you so much for your love and support for Lindsey <3