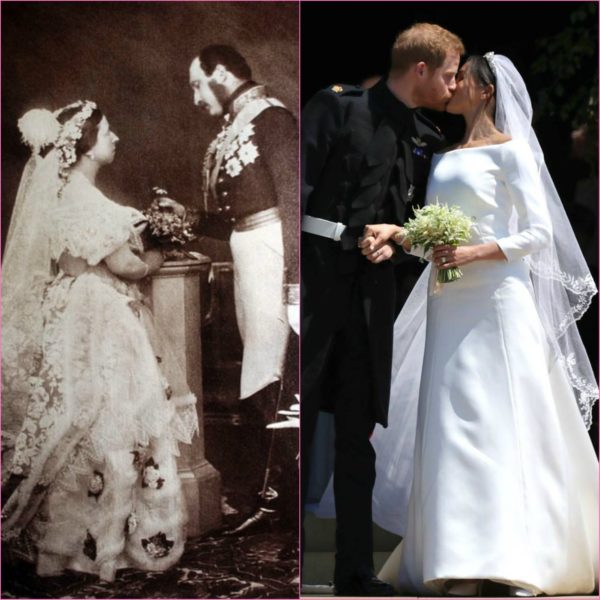 I have to admit I felt a little tweak of regret as I looked through my Facebook feed yesterday morning!  So many people celebrated the Royal Wedding in style with early morning brunch, gathering together friends and family to watch Harry and Meghan tie the knot.  I kind of wish I’d done the same but nevertheless I have enjoyed watching the highlights.

This weekend we celebrate the Royal Wedding as well as our beloved May 2-4 weekend!  In a few short days Queen Victoria would have celebrated her 199th birthday.  Did you know that thanks to Queen Victoria brides have been wearing white on their wedding day for 178 years?

Since Queen Victoria is the one who really started the trend of brides wearing white I thought it would be interesting to look at the similarities between what she wore and what Meghan surprised us with yesterday morning.

Meghan’s dress was designed by Clare Waight Keller, who was appointed the first female artistic director at Givenchy in 2017.

I was particularly fascinated by her beautiful veil.  It was important to Meghan to have a flower from each of the 53 British Commonwealth countries included in the veil. She came up with this design idea as a way to honour the work that she and Harry would be doing together as the Duke and Duchess of Sussex.  Meghan also had Clare include 2 more flowers, one being Wintersweet found in Kensington Palace and the California poppy, from where she was born.

Victoria’s dress had lace detail designed by William Dyce, head of the then Government School of Design (later known as the Royal College of Art) on a white satin dress made by Mary Bettans.

The plain satin gown was made from fabric woven in Spitafields, east London, and trimmed with a deep flounce and trimmings of lace hand-made in Honiton and Beer in Devon.   Sourcing the fabric and lace from these areas was important to Victoria as she wanted to show her support for the English fabric industry, in particular the cottage industry for lace.

Victoria also had flowers incorporated into her wedding gown. These were fresh orange flower blossoms, a symbol of fertility, The blossoms trimmed the dress and made up Victoria’s wreath, which she wore instead of a tiara over her veil.

I think what I love the most about this comparison is that both women show their devotion and vigorous support for Great Britain in their wedding gowns.  They both worked closely with the designers to really get their messages across.

Meghan was born in Los Angeles, California and Victoria was born in London England.  Clearly, where they are from makes no difference.  They both made a choice to show patriotism to Great Britain on their wedding day.

As Canadians we honour the Duchess of Sussex and wish her well in her new life with Prince Harry. Their love began in Toronto, Ontario and for that we feel so proud.

To our gone but not forgotten Queen Victoria, as Canadians we will remember you every May 2-4 weekend as we celebrate you, our Mother of Confederation!