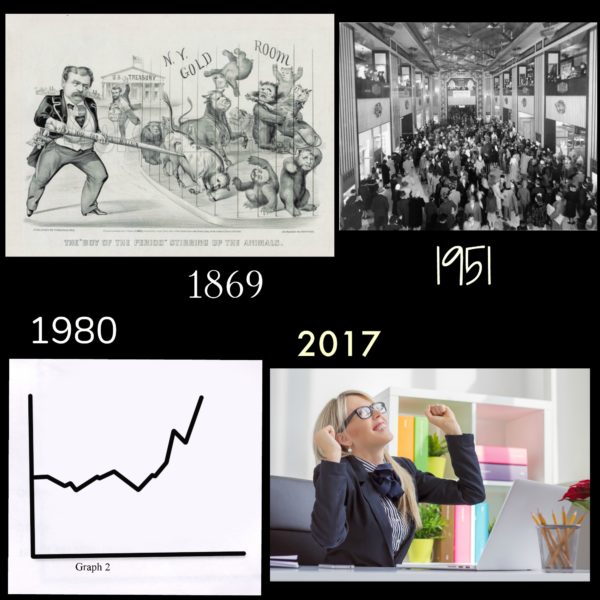 We all know Black Friday as a day when we cross the border to get some great deals after the Americans have celebrated their Thanksgiving!

Over the years Black Friday has become more of a global offering, so a lot of us choose to stay home and take advantage of great deals right here in our own back yard.

Black Friday wasn’t always known as the best shopping day of the year!  The first “Black Friday” ever recorded was on September 24th 1869 and this one had nothing to do with shopping!  This date marks the crash of the US gold market.  This crash occurred when two money grabbing Wall Street investors, Jay Gould and Jim Fisk, worked together to acquire as much of the country’s gold as possible.  Their goal was to drive the price up, up, up and then sell it for astronomical profits.

Guess what happened that Friday?  The conspiracy finally came out in the open and the stock market plunged.  Everyone,from American capitalists to farmers lost their shirts.  The country’s people were bankrupt.

We certainly have a different view of Black Friday today, as retailers decorate their stores and give us our first taste of the magic of Christmas.

That glowy description is not how it all started though.  Back in the 1950’s police in Philadelphia used the term Black Friday to describe the chaos that they endured the day after Thanksgiving.  Crowds of suburban shoppers and tourists piled into the city.  They were there to shop for deals and attend the big Army-Navy football game held annually on that Saturday.  All cops were mandated to work overtime and control crowds as well as traffic.  Shop lifters were also a big problem for them on this day as they would take advantage of the action in stores and run off with merchandise.

By 1961 “Black Friday” had really caught on in Philadelphia.  The city’s merchants tried desperately to change the name to “Big Friday” so that it would remove any negative connotations.  Well, as we all know, that never happened but in the 80’s something good finally did happen!

The NEW and IMPROVED story of “Black Friday” was that it was a day where customer’s purchases helped their favourite merchants go from “in the red” to “in the black”.  This story stuck and the negative stories of the past were long forgotten.

I love Black Friday just as much as all of you.  There is a time where we could all use a nice break when it comes to buying gifts or even necessities for our own day to day living.  Hey, going to the States can be exciting too!  Often they have different things than we do!

As a small business owner I want you to know that Black Friday is an important day for the little guy too!  Sometimes it’s a challenge to always be in the black.  The small business owner can feel the red days and months more and not always have a cushion to fall back on.

This is what happens when a small business owner is in the black:

So before you hop in the car and head to Walden Galleria think about all of the small business owners you love right here in your own back yard!  Get in on their amazing deals and join them in the happy dance as they rise into the black!