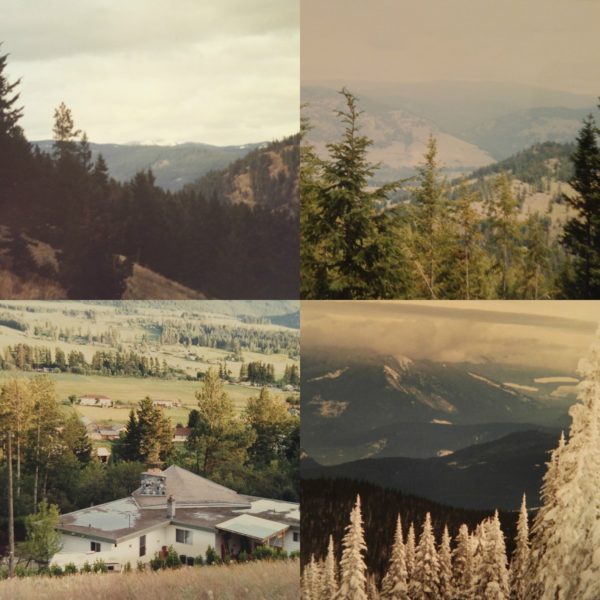 Oooh that Okanagan, such a magical place!  So magical in fact that Wayne and eloped there.  Hey, enough about me, I’m so grateful to share this amazing story from our Maggie.  We obviously share the same love . . .

“My dad was born and raised in the Okanagan, the middle child of three. His parents, though originally both from Saskatchewan, had moved to the valley after a short time in Quebec. When I was a kid, we would go back and visit my grandparents and all my dad’s old friends every few years.

Two houses were built by my grandfather for his family in the Okanagan, my grandparents lived in the second house until about four years ago when my grandfather passed away and my grandmother moved to Ontario.

This house was huge, it had this amazing three sided concrete wall with big rough stones set in it, with one side as a fireplace in the living room all in white quartz, one side as the stairwell down to the front door and the other side facing out to the driveway, the latter two done in found stones that my dad and his family collected from all around the valley.

My brother and I would play in the stairwell, looking at all the pretty rocks as we did. We would sit down at my grandmother’s upright piano and try to plunk out a melody, although I’m fairly certain we only annoyed everyone. We ran around the ridiculously long driveway, watched for deer, and played cards with my grandfather.

We would all go over to our neighbours, the Kennedy’s for dinner and ride Jenny the mule. Or at least try to. Trail rides through the mountains, swimming at Sugar Lake and Lavington Public Pool, visiting tack shops and the gemstone shop, buying second hand books and walking through the streets of Lumby.

After dinner treats of fresh fruit for grandma, dark chocolate with almond for grandpa and whatever cookies had been bought for our impending arrival for me and my brother.

The Okanagan, like O’Leary, was an adventure, but of a different kind. The Okanagan Valley was eagerly piling into the car for the O’Keefe Ranch for the rodeo, the thrill of watching mountains appear everywhere we drove, the delight of horses and cows and deer being nearly everywhere you looked.

Lumby and Lavington were true small towns, friendly and open, light-hearted and welcoming. It was attempting to turn a mule into a well-behaved schooling pony. It was running up and down the balcony playing a two-person game of tag. It was excitement and discovery behind every bend in the road and a place that was never truly known well enough.”

Maggie, thank you for this heartfelt story!  I particularly enjoyed all of your detailed descriptions of your surroundings!  I know this is going to be a colour combination that will be a smash hit for the glamjulz fall 2017 collection!  Just the word quartz made my heart beat a little faster!