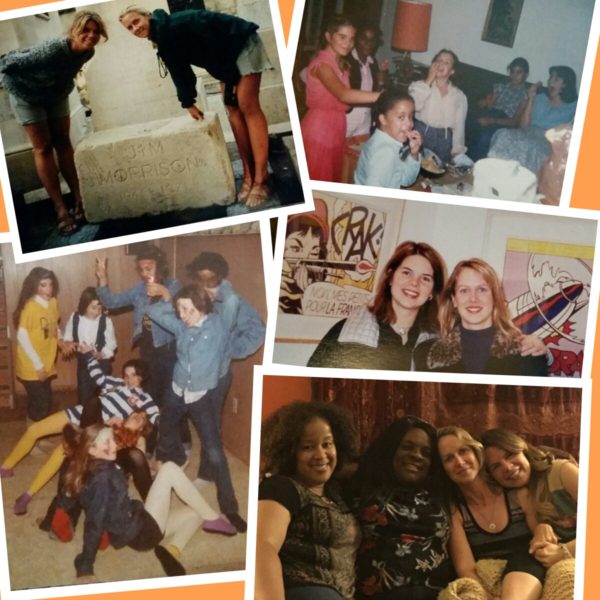 Have you ever had a magical day?  Not just a day where everything is going your way but a day that feels like a dream?  Maybe a re-occurring dream that finally forms into reality.

That’s what Friday was for me.  I’m still in a wonderful, blissful state of shock.

My friend Jen invited me over to dinner on Friday night.  She told me she was cooking my favourite meal and that I had to be there between 5:30 and 6 or it would spoil.  I’m a classic 10 minute late girl so I managed to organize myself and arrive at her house by 5:40.

She greeted me with a hug and a beaming smile, I walked up the stairs and there was my best friend Sally, Jen’s sister, standing in the kitchen!  I nearly dropped to the floor.

Sally and I grew up together, friends since grade 3.  High School happened and we became inseparable.  We went through everything together!  The boy crazy years, high school dances, first loves, first drunk night, getting our drivers licences, we even took the Judy Welch modeling course together.

In the late 80’s and we were slightly obsessed with super models.  When George Michael came out with Freedom 90’ we wanted to be in the video.  Sometimes we would refer to one another as Cindy and Claudia. Ha ha!

I remember we used to cruise up and down Lakeshore on Sunday nights listening to the radio program “Lovers and other Strangers” on CKFM, laughing till our guts hurt.  Every page in my diary from 1984-1994 is all about my adventures with Sally, including an entire diary documenting every detail of backpacking through Europe together in 1990.

Sally has lived in England since 1995.  We used to see each other once a year but as life moves on and gets busier, it’s now been 6 long years that I have missed her terribly.  I actually do have re-occurring dreams where we are hanging out and laughing together and it feels like no time has passed.

This magical night continued when the doorbell rang and two more friends, Melloney and Melissa showed up from our Woodside Public School days. They had not seen Sally in 16 years.

Most of our primary school gang was all together again.  The night could never have lasted long enough.  Sally was visiting family in Vancouver and took a one day lay over in Ontario.  Jen made all of this happen for us.  I would have understood if she had just wanted to be alone with her sister.  Such a kind and generous gift for Jen to give to all of us.

The night was so needed, so therapeutic.  I felt the power of sisterhood between all of us.  We caught up on all the good times and difficult times we’ve had over the years.  Everyone got a chance to share and at one point I just sat back and felt such pride in all of my friends.  All of us intelligent, responsible, caring and strong women.  The room was safe, there was no judgement and nothing but beautiful memories between us all.

I hope Sally can make this happen again next year so we can get all of the Woodside Public School sisters together!  I have a feeling we would need more than just one night and we’d make history!

Next time, we must remember to wear our capes, gold cuffs and tiara’s.  Come to think of it, another year from now maybe we can all fly right to Sally in my invisible jet!

That’s why you are so special Jen! XO

No human tops my Mama, but I have been blessed with the influence of amazing women in my life.
There is something powerful in girls who grow into women together; they are superglued for life.
The bond strengthens with time.
Age, distance, jobs, physical space, life and death cannot break that connection.
We did, and will always, make each other stronger.
Our bracelets should have 3 Ws – Woodside Wonder Women.
But, honestly, we don’t need them.
I can plant my feet, breath in, swing my arms above my head and then place them on my hips and breath out.
When I do that, I am rooted to W3 and I feel our power flow through and strengthen me.

Romy!!! LOVE you so much! This is amazing! I think you just came up with my next design idea…BTW…your up for next best friend blog! June 19th, we make history!! XO

❤️❤️.Love this Moni ❤️❤️ Just awesome!! Truly truly a special time .. the power of sisterhood was truly present !!!! Still on high from it It was like no time was lost!! I treasure our 40+ year friendships…. laughter, joys & few tears ( I was a bit misty eye when I got home lol) Our friendships is gold!!!! I am in such awe. Thank you ❤️ ..xo

Milly Mel!!! Me too!!! I feel like we won the lottery when we all ended up at Woodside! WOW! This is amazing! Love you TONS! XO

Yess Moni !! ThIs exactly how I feel too ! Xoxo

Dear girls…
We always were magic…. all of us… every single one very special…. because we were all especially caring
I feel lucky to have been with each and every one of you…and that all of us coincidentally met…. for some a few years… for others longer
was it really coincidence? who knows…. I feel we all have a very special connection…. going beyond other issues
I know I will be there every day when each and every one of you needs me…. and I know I can reach out to each and any one of you … because you are all priceless….
and I do believe … a friendship like that …over such distances… and so many issues…is very special… and we should cherish it and not take it for granted…. because… not many people have that
that is about as close as I can get expressing my feelings in words…. xoxoxo

and I hope ….wish… lots more get those friends….experiences in life…. so priceless….so rare…..

Cornelia! This is truly beautiful!
Love you so much! XO

ugh… did I really use the word “priceless” twice? Mr MacKenzie would kill me *shock*
never mind…. it was well chosen….. xoxoxo

aw…. I love this blog so much <3
Wish I could have seen Sally – so many fond memories of Woodside.
Love that I'm still in touch with so many of you xoxo

PS – Woodside water clearly in effect – Sally looks exactly the same, after all these years, as do Monica, Melloney and Melissa!!!

Thanks for sharing! The circle includes so many of us who really appreciate your love!! Superstar 🙂

Awww this was amazing to read!!! What great medicine friends are!!! So happy that night happened for all of you!! xoxo

You got that right! The best medicine!

I am sorry I couldn’t make it but I did sneak in 90 minutes with Sally friday afternoon, what a time…memories with a dear dear friend and I agree and hope she makes it back with the family and thank you Jenn for opening your home to us Blakelock crazies!!!