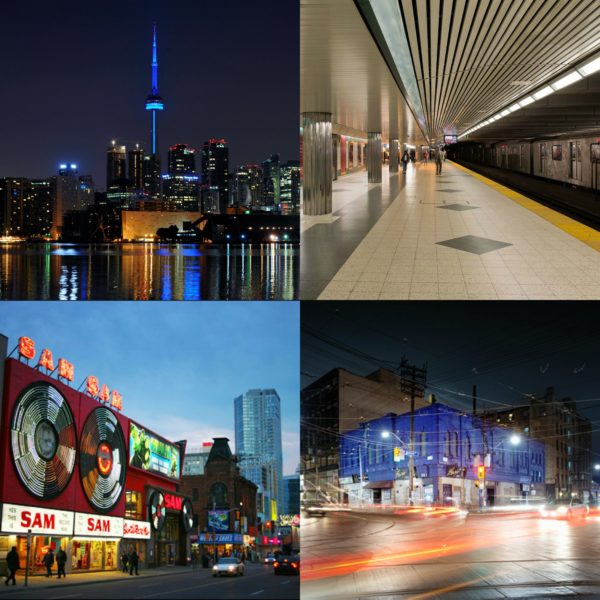 This city holds a place in my heart that is so big it actually flutters.

I grew up in Oakville but my heart is in this city.  Toronto is my foundation.

My parents met in this city, my Oma lived at Pape and Danforth and I was living the city life from the time I was in the womb.

When my Mom started having contractions with me my Oma drove her along the Danforth, across the Bloor Viaduct and straight to the doors of the Wellesley Hospital.  That drive was made very gingerley, entirely in 2nd gear in my Oma’s 1967 emerald green beetle.  That was August 20th 1969. 48 years ago today!

My parents both immigrated from Germany.  They met in Toronto in 1959.  My brother and I were raised to love the city.  This is the city where we became cultured and got a taste of what was waiting for us to experience in the world.  Neighbourhoods like Chinatown, Little Italy and Greek Town were fascinating to us.

When I became a teenager my obsession for rock stars and new wave music became the most important thing in my small Oakville life. I begged my Mom to take me to Toronto so I could shop for posters, pins and t-shirts.  What did my Mom do?  She called in the big guns!  Oma was up for the job.  But only under one condition.  I had to take the GoTrain to Union station and then make my way on the subway to meet her at Yonge & Bloor.

I remember being so nervous, my palms were sweating.  I kept double checking my purse to make sure I had my Go Train ticket.  Once the first leg of the trip was behind me I had to find the Subway and buy a token.  If there had been cell phones then, I probably would have called my Mom 10 times.  This was 1983 and I had to follow signs and ask friendly faces in the crowd to help me.  I made it on my own and Oma was so proud!  Oma knew exactly where to take her teenage granddaughter.  We hit Sam the Record Man, all the head shops and made our waysouth to the Eaton’s Centre where we shared an Almond Croissant at Michel’s Baguette.

My fascination with Toronto’s night life started when I was a kid.  We’d spend weekends at Oma’s.  My Mom and Dad would come on Sundays to pick us up and take us home.  I would beg my Dad to  pleeeeeeease  go out of his way and take Yonge Street to the  highway so I could people watch and see all the neon lights.  He’d even turn up the radio for me too.  Disco nights on 99.9 CKFM was the perfect soundtrack for those drives.

As I got older, not only was I a TTC pro, but I could navigate my way through the city like nobody’s business. North, West, South, East….a perfect grid!

I became the designated driver for nights with friends at our favourite clubs.  We Oakville kids were regulars at The Big Bop, The Copa, The Diamond, Velvet Underground, and RPM.

Growing up with liberal parents who always encouraged us to create meaningful experiences is the best thing that ever happened to me.

I have traveled to many places and Toronto remains my number one city.

The glamjulz Toronto collection will pull you into the magic of our beloved concrete jungle.  The glow of the beads will light you up.  You will become the most powerful version of yourself.  I want you to stand tall in these pieces and fear nothing.  If you want something,work for it.  If you have a dream, make it happen!  Be like Toronto and let every facet of yourself shine to those who are watching!

Happiest of birthdays, dear Monica! Hope you’ve had the best day And a BIG thank you for the lovely birthday goodies you sent my way a couple of weeks back…I LOVE them. You’re the greatest…hope you get spoiled today.

Jannah! Thank you so much! You deserve to be spoiled too my friend

Can’t wait to see it ! Those were the days !! What about the CFNY roadshows ? And concerts at the Ex and the Gardens – I remember trying to order drinks at Mr Green Jeans in Eaton Ctr – epic fail … we weren’t too swift but at least we tried, lol ! I remember the Go Train and the late night weirdos at Union Station

Natasha! I really wish I had known you in high school! I did all of those things too! The CNE was where I spent my birthday yesterday…so many memories came back! What a city we have! By the way, I have a Mr. Green Jeans menu from 1982. XO

I remember that every Wednesday, I took Eric and you to visit Oma in Toronto. At every stop, as the passengers were getting off, THE VOICE would boom: “Stand clear of the doors please”.
You thought he was saying: “Sam, clean the doors, please”.
Poor Sam, I bet he could hardly keep up.

Love this memory Mom….I’m so happy you shared it. I wasn’t able to squuuuueeeeze it into the blog and coming from you it sounds so much sweeter XO