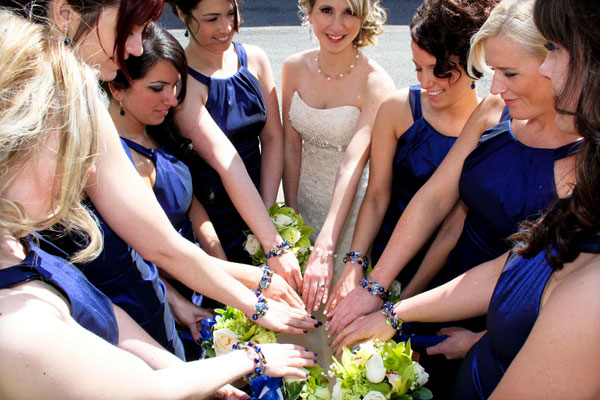 It’s that exciting time of year again, where many brides are out and about at Wedding Shows and Bridal shops searching for all of the perfect details to make their special day extra magical.

I thought it might be fun to highlight some of the traditions that most of us follow and tell you about where they came from.

Now before you rush out and get yourself a blue tattoo you can always call us for some blue julz to adorn yourself in.  Enjoy the whole process leading up to your most special day, and hopefully this explanation of the many traditions will help you decide which ones are most important to you and your soon to be hubby!

LOVE this! I’ve always wondered about some of these time-honored traditions. Thanks for sharing!

“Tying the knot” comes from the Scottish tradition of handfasting. Because there was a shortage of clergy to marry couples, a town elder would perform the ceremony. The ceremony expired after one year. During that year hopefully a member of the clergy would come through town to have a church ceremony.

My husband and I both have Scottish roots, so we incorporated this ceremony into our Presbyterian ceremony. The vows are very honest.
Minister: “Tara will you cause Gary pain?”
Tara: “I may.”
Minister: “Is that your intent?”
Tara: “No.”
Of course Gary responded with, “I will,” which made everyone giggle…